Turn it into candy. Or jams. Anything! Just add a good deal of sugar and reduce it! Then cure it and turn it into delicious sugar bark.

what is it about capybaras that attracts groups of small animals to them?
Its not just mammals either its like birds and turtles and frogs too

look at this shit

I enjoy the fact that they just allow this to happen. It’s as if it likes being cuddled.

You know that is odd, because I was thinking the very same thing. I was thinking, “Clearly the reptiles and amphibians appreciate the warmth put off by this delightful mammal. This reminds me of going to bed at night.” I very cold. He is very hot. When we do sleep together there is a delightful equilibrium that is achieved.

Alcohol rinse. Some people rinse with oils laced with all manner of pain and antibacterial botanicals. You’ll need a great deal of garlic to kill an active infection. You need to smell like it to have it work, it needs to seep from your pores when you swear. 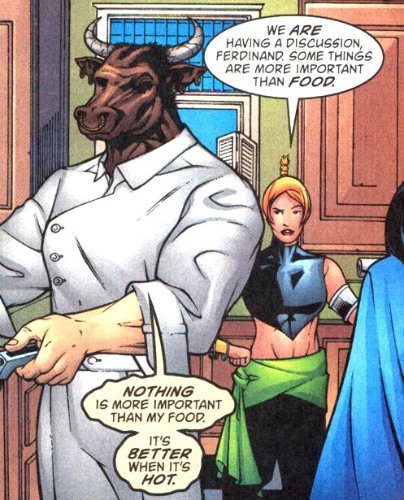 If Ferdinand, the Minotaur Kythotaur Chef, does not show up in any of the Wonder Woman movies, I will riot.

the best thing you will see all year

Adorable. I shall now have to buy balloons and see if the great oaf can manage it.

what is it about capybaras that attracts groups of small animals to them?
Its not just mammals either its like birds and turtles and frogs too

look at this shit

I enjoy the fact that they just allow this to happen. It’s as if it likes being cuddled.

@simonalkenmayer – as promised, steak pictures. It did not turn out as rare as I would’ve liked. Last time though the steaks were thicker – filet mignons to be exact, where I believe these were porterhouse. I’m not good at identifying steak except for filet mignons because they’re my favorite.

I know you wash off the marinade before cooking, but mom likes it on and likes to have the extra poured on while cooking. I also put a bit of A1 on them because despite turning them and massaging them often they still had a dry spot or two. I’ll put the pictures under Read More to not stretch out people’s dashboards.

You don’t wash the meat off after you’ve applied marinade, you just pat it dry. any sauce you want to make you make secondarily away from the meet and then apply to the meet after the meat has sat rested. Thinner steaks, less than 1 ½ inches only require a few minutes per side on high heat to be considered rare.

My steak post is tagged. Please do locate it. It gives all the proper instructions.

Ah – forgot the pat dry. Mom wants the marinade to stay on the steaks either way when cooking. And since the goal is to get her to let me cook more often in some regards I’m going to follow her instructions.

I knew they should’ve been on there a shorter time.

The grill wasn’t getting very hot – I think we’re almost out of propane. So I left them on what turned out to be too long. Next time a shorter period of time no matter how cool the grill seems to be. I even did the water test and the water didn’t sizzle even though the grill had been on long enough and was at full blast.

If you leave the marinade on the meat, it forms a crust that prevents a proper sear.

Mom likes it that way though. Everyone’s got their little quirks. Me, when making s’mores I like to burn the marshmallow while everyone else likes it a light, golden brown. I stick mine right into the flames, let it burn until the outside is black and the inside is molten.

As do I, but if you cook it in the juice that is a completely different cooking method, so you aren’t technically grilling or searing. You’re boiling the meat. Means keeping the meat rare is much more difficult.

No I am going to have to go but some beef to demonstrate my methodology. Look forward to a dinner post from me.