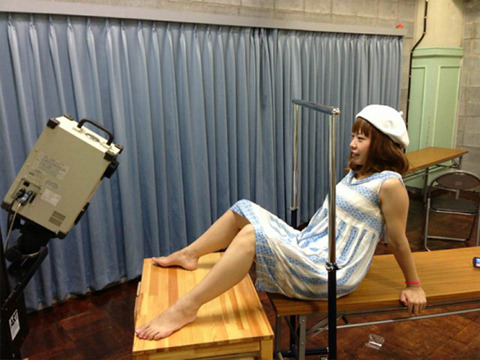 She had a dream and she realized it.

Hey wait but sit down

This is Megumi Igarashi

Japan, the country with some of the most fucked up pornography and the penis festival

Where the vagina is basically illegal to talk about

So she did a bunch of art featuring 3D sculptures of her vagina, including this kayak, and was put in jail for it

In Japan, women’s vaginas are treated as though they are men’s property. The trains here usually display pornographic advertisements. As a woman, I find that blatant objectification to be humiliating. I’m disgusted by it. My body belongs to me.
So, with this project I wanted to release the vagina from the standard Japanese paradigm. Japan is lenient towards expressions of male sexuality and arousal, but not so for women. When a woman uses her body in artistic expression, her work gets ignored, and people treat her as if she’s some sex-crazed idiot. It all comes back to misogyny. And the vagina is at the heart of it.
The vagina is ridiculed. It’s lusted after. Men don’t see women as equals—to them, women are just vaginas. Then they call my vagina-themed work “obscene,” and judge me according to laws written by and for men. [x]

She plans to turn her trial in to a manga comic. She seems pretty sure she’s not going to do any jail time but if you’d like to help her pay for her inevitable fine and court fees, you can check out her online store. There are little glow in the dark vagina characters.

Wow I’ve seen this reblogged a ton of times without seeing the whole going to jail part.

Here’s a recent article about her from July of 2017.  It looks like she did some brief time in jail, and is currently still working on this artistic effort, as well as trying to raise awareness about a new terrorism law and the jail/prison system in Japan.