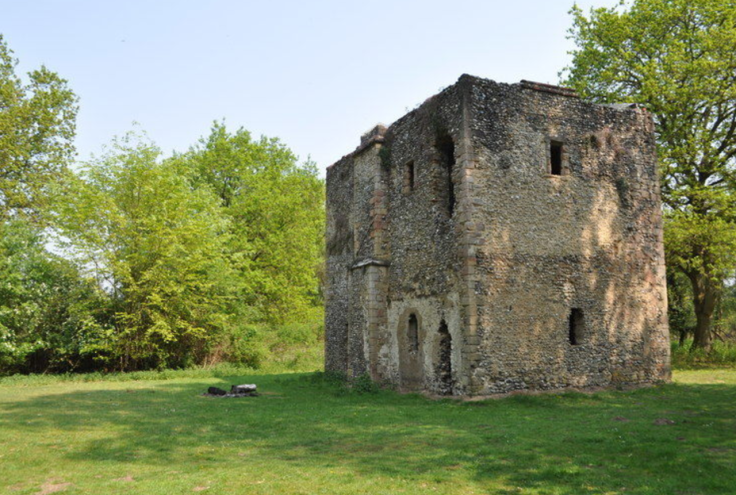 Crumbling in solitude in a pine forest in England’s Breckland area, this castle-like structure dates to about 1400. With its three-foot thick walls, defensive arrow slits, and once-barred windows, it’s a testament to the value landowners and poachers alike once attributed to rabbits.

After being reintroduced by the Normans, rabbits became a luxury item in 15th-century England. They were prized for both their meat and fur. Landowners feared armed bands of violent bunny poachers so much they constructed impenetrable lodges and employed a resident “warrener” to tend to and defend their precious fluffy-tailed resource.

Inevitably, the intrinsic value of rabbits fell as the captive critters escaped their guardians and bred, as they do, in the wider countryside. Most warren lodges were abandoned by the 18th century. However, Thetford Warren Lodge was in continuous use as a place to store and dry rabbit skins until it was damaged by fire in 1935. Its late survival is thanks to the sandy soil of the Breckland, which is not well suited for commercial agriculture. Rabbits and flint remained the lifeblood of the local economy until the 20th century.

As with most structures of its age in Britain, Thetford Warren Lodge is not without its own spooky legends. Here, the threat of the supernatural comes from an unusual source: a giant Monty Python-esque spectral rabbit with glowing red eyes. According to the legend, this prophetic horror bunny foretells the impending doom of all who see it. The lodge was also supposedly once a leper’s house, and is apparently additionally haunted by the ghost of a man.