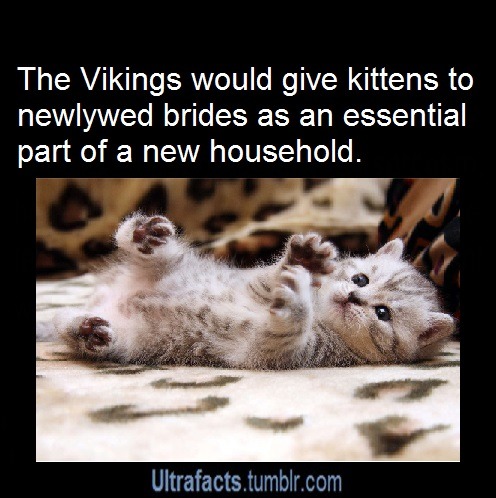 Yes this could have to do with the fact that Freya the Norse Goddess of love, beauty and fertility drove a chariot pulled by cats.

So, if I ever get married, I fully expect a catmobile.

One of the other reasons why they gave cats to each other was for their valuable skills as mousers. Cats were able to control rodent populations around their properties.

Also, Norse myths are thought to have the earliest literary descriptions of the Norwegian Forest Cat. They were described as large, strong cats that drew Freya’s chariot and were so heavy that not even Thor, God of Thunder, could lift them from the floor. (Source)

They kinda live up to the legend, too. Your average Norwegian Forest Cat is twenty pounds of solid muscle, with claws large and strong enough to climb solid rock. They’ve been known to attack bears when defending their territory. And yet they’re one of the cuddliest breeds out there, particularly noted for being patient with small children.

I have a Norwegian mix, and can attest that she is the cuddliest cat but also insane enough to try and fight a bear.

i love mythology in any place of the world. It’s all just great!

I have met this type of cat. It also hates me.