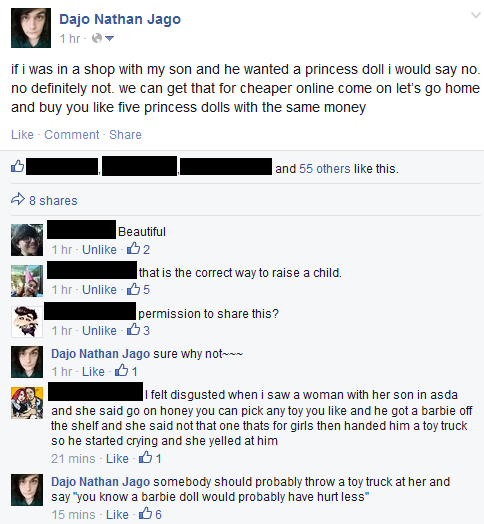 I went to the Renaissance faire dressed as a warrior.  I had a real sword with me, too.  I was standing (in character) next to a sword-fighting ring, where kids of all ages got the chance to pick up a sword and challenge the champion.  Some woman walks by, with her little girl.  The girl starts walking towards the ring, saying she wants to fight.  But the mom pulled her away hella sharply, and was like, “That’s for boys.”  You don’t want to be a BOY, do you?”    And the girl looked around and saw me.  I think she thought I was a boy; I had my hair in a ponytail, and was wearing a hood.  So she comes up to me and asks me, “Do you think girls can be fighters, too?”  And her mom looks like she’s silently gloating.  Like she thinks I’m going to say no.  So I take off my hood, untie my hair so that it flows freely, and kneel before her.  And I’m like, “Milady, anyone can be a fighter.”  I swear, the look on that mother’s face made my day.

This post was good but then it got better

Okay, this is a slight topic diversion, but in response to the above comment. I’ve volunteered at the CT Ren Faire for years now. For the last 5 or so I’ve worked in the game section, and we have a game similar to the above comment called “Smite the Knight”. I’ve been in the ring before, it’s a ton of fun getting to run around with the kids. The main goal is entertainment. Have a good shtick, keep the crowd engaged, and let the kids have a good time.

In both work and observing, I have learned something about kids. A lot of parents try to get their boys to go fight. Of the young ones that do, they tend to be shy. You get the ones who just swing the boffer swords around with no regard for life, but, mostly, they’re reserved. It’s adorable. I mean, they’re kids.

But the girls. THE GIRLS. Holy crap. I swear, the pinker the dress, the more taffeta and glitter…the more intensity. I remember, the first year I worked there, one girl came in, grabbed the biggest sword she could, and WENT TO TOWN on our knight. Lifted it over head, let out this primal scream and mowed him down. Homeboy is 6′2″, she was FIVE. And once he was in the fetal position (He was fine. It was for show.) on the ground, she stopped, put her foot on his chest, and yelled “I AM A FIERCE PRINCESS!!”. Later in the day when she walked by a couple of us yelled “Ah! It’s the fierce princess!” and she stopped and flexed. It was the best, and I will never forget that girl.

OH MY GOD IT’S BACK YES

This has improved since last I reblogged.

I taught karate for like 5 years, and the girls were always, pound for pound, better than the boys. Even the girls who didn’t really want to do it and were only there because their parents made them were better than like 95% of the boys.

I was playing fiddle at a ren faire, and two little girls were really enjoying our set. After quite some time one of them walked up to me and shyly offered me her star tinsel tiara, because she “didn’t have any money. And this protects you from trolls!” I said “Thanks, that’s really sweet – but what about you? Don’t you need protection from trolls?”

At which point this six-ish-year-old girl whips out her certificate from the axe throwing booth and says “Nah, I’m fine.”

I still have that tinsel tiara. It’s draped over my modem. I figure it’ll protect me from the most trolls that way.

Jeanne d’Arc took an arrow to the shoulder during the assault on the Turelle, during the Siege of Orleans. She was carried off the field by her knights. All seemed lost, if the Maiden of prophecy can fall in one moment, but within an hour or so, she was up, and rousing the troops with her arm tucked in. France took back the city, and she walked the camp praying with the men.

Her alacrity with a sword was confined to waving it for effect, but she lead the army like a lioness. She was captured because she wanted to keep up the war even after the King was crowned, and he saw no reason for it. He withdrew his support, and she was captured shortly thereafter.

He made no real attempt to rescue her. She had served her purpose. She was burned at the stake for wearing men’s clothing. People say witchcraft, but that couldn’t be proven. Her crime was heresy via crossfressing. Something into which she “relapsed” because they stole her dress from her. It was wear britches or go naked, and a maiden never walked round nude.

Centuries before her, Queen Boudicca tricked the Roman Legions into leaving London and then attacked the city. Burning it to the ground with such ferocity that the ash layer is preserved in the bedrock. She killed hundreds and took no prisoners.

Women are perfectly tuned to fighting. It alogns with innate instinct to protect and natural talent at organization. Women are taught not to fight, not to strategize, but that is ridiculous.

And then to the opposite side, for centuries men were the only artists permitted to practice. From music to painting, to clothing and so forth. All the tailors that created the trends of the days were men. Men have been sculpting the female form perfectly for thousands of years. Depriving a boy of a Barbie is stifling his potential ability to create art. In the modern era art is seen as effeminate, but not so long ago, it was the preview of the male. Incredibly odd to watch that trend unfold.