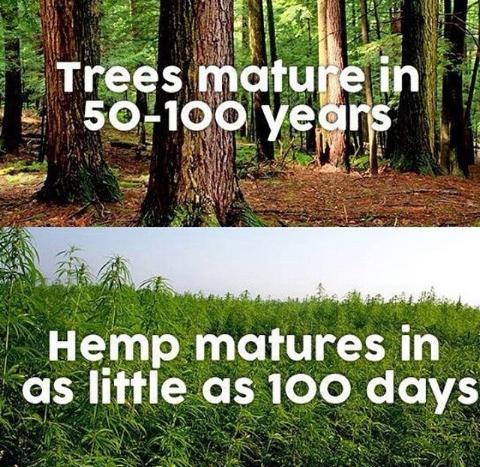 Our forests are being cut down 3x faster than they can grow! One acre of hemp produces as much cellulose fiber pulp as 4.1 acres of trees!!! This is super useful for so many things, especially paper production! In addition, hemp takes in carbon dioxide 4x as fast as trees do, which makes it especially valuable in the act of reducing CO2 emissions/greenhouse gases! 🌲🌲🌲 source

Usually the argument on why you can’t have hemp is because then people will hide marijuana in it.

yeah, sure…. if they want shitty, shitty marijuana.

It would be like growing sweet corn and dent corn together.  Yeah, they look similar at a distance and they’re closely related, but you don’t want them next to each other as they’ll cross pollinate and you’ll end up with bad versions of both.

Same deal here.  a patch of marijuana grown in an open field of hemp IS going to get contaminated and it’ll lower quality of BOTH crops.  Your hemp farmer doesn’t want that and if likely going rip out any patches trespassers try to add for same reason.

and the big issue is not even the THC content.  Because most quality marijuana is intended to be grown indoors or greenhouses, its a dwarf variety. Short.  Fiber hemp is bred for height so as to maximize fiber production.  super tall. It’s going to be really obvious, really fast if you’ve got both in the same field even before you get to the point of pollination. what’s this runty bullshit doing in my field?

They also have different growing needs with regards to spacing, harvest time, etc. so the argument that you can hide marijuana in industrial hemp fields are basically bullshit.

anyway… aside from paper, hemp fiber can also be used to make earthquake resistant concrete that’s actually LIGHTER than conventional concrete while being stronger. It’s better at resisting flexing or warping, so ideal for stuff like bridges and highway supports as it’ll better resist large temperature swings and vibration. (”hempcrete” is slightly different, but makes great fire resistant insulation)

Just to add, it can be used for paper, concrete, insulation, cloth and rope (both rough like sack cloth and smooth like cotton), bio degradable plastics (oddly same for banana trees I believe) and then of course for things like fishing lines and nets etc.

It’s a very versatile and useful plant that has been used for hundreds or maybe even thousands of years for material uses, and with modern advances is becoming even more useful thanks to chemical engineering and similar.

Biodegradable plastic folks. Why is that important? Because of the Great Pacific Garbage Patch.

@simonalkenmayer got any hemp-happy tales?

Aside from “We once used it for everything and still had trees to climb” and also, “William Randolph Hearst was an ambulating sack of garbage”? No, not really. Then again, his whole family were a pack of jackals.