Oh yes they definitely sell weighted blankets, it seems to help with anxiety and other things!

I want a chainmail shirt.

Oh yes they definitely sell weighted blankets, it seems to help with anxiety and other things!

I want a chainmail shirt. 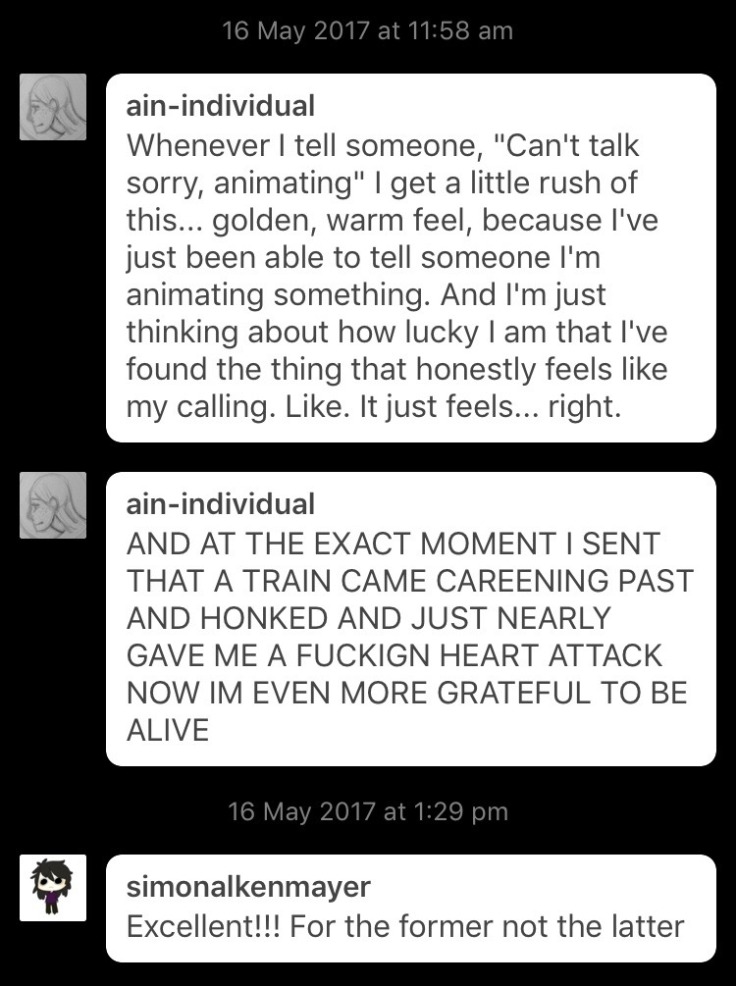 Throwback to this conversation with @simonalkenmayer :^D
I am still quite happily animating, and arting in general!

So many of you come to me for advice of a specific kind. For whatever reason, you are afraid, your own capacity to undertake things and succeed seems doubtful, your failings sidetrack you. You perceive flaws in how you were educated or how you were raised. You conceive of the world as a place without a home for you, in which you are awkward children amidst a sea of those who somehow grasp it all so effortlessly.

Your thinking is shallow.

You are on the surface of the world, the edge of culture and believe that you have no roots, but that isn’t so.

You are the extension of everything before you. Trace backward through time and see how humans not only learned things but condensed them, tuned vast studies that took some men their entire lives and did away with extraneous information and built upon that. Every study you learned in third grade took generations and ages to acquire and curate, and they have all been parsed into little blocks upon which you’ve built your understanding of the world.

You perceive that you have been shoved out to the edge. Yes, you have. But that is where you belong. You are not outcasts, but the vanguard, the armor, the skin of the world. They shove you out because they need to. They need what you have to defend them from the things only you can see coming. They lie to themselves about why they put you there, why you need to be far away from them, how uncomfortable you make them, because they must, in order to do their job, given what they have seen. The past is flawed, the future more refined. They are of their idiom, and must put you out into yours. Their occupation is to function, to filter, to process, to churn up data. Yours is to reach, to conceive, to create, and to confront. They are entrenched, being swallowed, and you are on the surface.

That is your purpose in the world, because you are the product of all the plateaus beneath you that were buried and absorbed as new minds stepped forward.

This is your moment to form a phalanx, defend the world, and when it is your time, step inward and hold up the next shield, knowing you have contributed to that next generation who will be the armor your species needs.

You see yourself as weak, but you have everything you need, because you were built on very sturdy stuff. And some poor saps, now turning into soil, built you math, then others who are dust built you a computational machine, and another group of humans turned those into a computer, and hundreds more turned those into communication with every part of the world. Instant information and analysis, instant output of that information. You are powerful in the extreme and have but to use it.

You are all that precedes you, both good and bad, with the benefit of hindsight and the ability to see what has failed and strike out for new. They will drag you back, because when you pull away it is painful, but you can drag them, because you are stronger.

You feel unattached, but that is because you have one foot in the past and one in the future. That odd footing is what you’re meant to have. It’s important that you sense it and that you be unafraid. Or perhaps better said, brave even though you are.

You are, at this very moment, pulling together everything that was, hypothesizing what may be, drawing it to you, smithing all into iron, and creating a stronger culture, a sturdier ethic. Without you, there is no future.

You are what you need to be. The ones before you must draw inward. You can use what they made and what you can imagine. You are not displaced. You have roots. You have a foundation. And though it anchors you, you can drag it, because humans are not immortal, and death is what awaits, as each old one turns to dirt beneath you, and each new one blossoms outward.

If you feel weak, seek out what history you need to be strong. Those leaves closest to the sun are what feed and protect the tree, but they are also quite delicate You spread out, you look over and everyone like you is far, and you are tied to something thick, and that twig to something thicker, that to a trunk, that to a root. You have roots, and the taller the tree, the farther they are from you, but that is precisely what must be for this tree to grow.

You know that, but you never say it, because for you to do so feels like hubris. In honesty, the tree should be the one pushing you toward the sun in joy. I am sorry if it doesn’t. The foundation should be carrying the load of all your immense height. I’m sorry it shifts a bit beneath you. They are human, they have flaws. It remains to be seen if the flaws are so grave that they will shake everyone, if one deep breath will shiver through and quake all that structure to dust. You’re the only ones who can determine that, because only you have the perspective necessary.

I aim to help you realize your strength and I know what I’ve said is a bit unsatisfactory, but the universe is chaotic. It functions as it does, in spite of human expectations. Knowing your place, thinking beyond what has been thought before – the arrogance of destiny or divine creation – is terrifying, but that is how humanity will mature. And maturity is greater than simply aging. Aging is withering, crumbling. Maturation is enrichment.

You are critical to this process. your function absolutely essential.

Everyone before you has felt the same, but in many ways, their lives were smaller. The tree was tiny, the tower only high enough to keep out the waves. They thought about tomorrow. Your timescale is in the billions, because for the first time, humans can conceive of “billions,” of eons, of infinitudes.

Don’t be discouraged by your position. It’s where you belong and the only place that anything can ever be achieved on behalf of your species.

That is simply how it works.

Every generation has felt like you. They merely didn’t have an outlet to vocalize it, and others weren’t able to hear it. That your generation can talk to itself is important.

This generation is different because it can speak to itself. Each one of you cavaliers the discomfort and pain, and each one of you hears it and thinks “my god, it’s never been so loud before!” Which then reinforces the idea that this is the end of the world.

No. It’s just the first time anyone listened.

The first time any generation had the opportunity to speak.

Millennials are killing the Silence industry.

Just keep your perspective. Don’t allow the amount of noise to tell you that your feelings are worse or different than those of the youth in the past. You have a job to do. Go do it. And tell these moldering imbeciles to get out of your way. They have one job now – feeding the tree. They aren’t the innovators or protectors anymore.

This is easily amongst the best motivational articles I’ve read in years.

Well…I’ll take the compliment but attest that I sought only to acquaint you with your own relation to history. As I said, it’s the first time a generation could effectively talk to itself. The 60’s has some of that, but only via displays captured on camera. The 70’s has magazines. The 80’s has MTV, the 90’s, hip hop and the beginning of the chat rooms.

You have the internet. You can communicate with one another and reinforce your own fears.

It’s a new phenomenon. But it represents an older one.

Just remember that it is your time to step forward and be that protective layer, that surface that is exposed to the universe.

I am having my thumb examined with the X-ray. Dr Mike warned me that he might be partly under the influence and might have someone else sit in. Which made me laugh. Sit in? To govern him or me?

I’ve been asked this before and hesitated to answer. I’m too Old™ for favorites, but currently my favorites are complicated meals with many elements, like curry, which is deceptive looking. And by curry, I mean curries of many cultures, not just Indian. I like fusion, and so experiment.